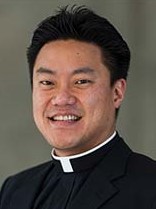 Born in Seoul, South Korea, Father Cho graduated from Rutgers College (B.A. in Computer Science, 1997), Columbia University (M.S. in Computer Science, 1999), and Stevens Institute of Technology (Ph.D. in Mathematics, 2006).
After entering Immaculate Conception Seminary, Seton Hall University in 2006 and completing a year of Pre-Theology, he continued priestly formation at the North American College in Rome. He completed an S.T.B. (2010) and an S.T.L. with a concentration in Dogmatic (Systematic) Theology (2012) at the Pontifical Gregorian University in Rome, and was ordained a priest of the Archdiocese of Newark on May 28, 2011.
Father Cho was assigned to St. Theresa Parish in Kenilworth for the summer of 2011. He served as Parochial Vicar of St. Bartholomew the Apostle Parish in Scotch Plains from 2012 to 2013. In Spring 2013, Fr. Cho was appointed to the Formation Faculty of Immaculate Conception Seminary, where he also teaches courses in Systematic Theology. In January 2015, Father Cho became Associate Dean for Undergraduate Studies at Immaculate Conception Seminary School of Theology. He is currently assigned to Rome to complete his doctorate in Theology.

Contact Information
Email
hongray.cho@shu.edu
Phone
973-761-9575
Website
https://www.shu.edu/profiles/hongraycho.cfm
Curriculum Vitae
Link
PDF
PDF Download
not available
Related Updates
No items found.
Thank you for adding a profile!
We'll email you once it's been successfully added to the database.
Oops! Please make sure all required (*) fields are filled out.