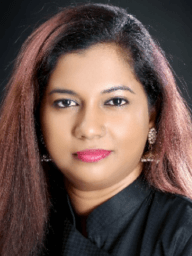 Dr. Sharon Jacob’s research interests include gender and sexuality studies, postcolonial theory, race and whiteness theory, and feminist studies. She draws on her contextual experiences of growing up in a multi-religious Indian context as well as her current experiences of living in the United States as an immigrant to form her teaching and scholarship.

After completing her undergraduate education in her native Bangalore, India, Sharon earned her Masters of Divinity from Lancaster Theological Seminary in Lancaster, PA. She also has a Masters of Sacred Theology from Yale Divinity School and her PhD from Drew University in Madison, NJ. Her book Reading Mary Alongside Indian Surrogate Mothers: Violent Love, Oppressive Liberation, and Infancy Narratives was published by Palgrave MacMillan under the Bible and Culture Series in 2015. In this book, Sharon takes a hard look at the growing industry of surrogacy in India and uses the stories of these real life mothers as a lens to reread the Biblical figure of Mary in the infancy narratives with the hope that a more complex and nuanced interpretation of her motherhood can begin to emerge within the globalized context.Sharon comes to PSR from Phillips Theological Seminary in Tulsa, Oklahoma, a seminary affiliated with the Christian Church (Disciples of Christ), and taught previously at Luther College in Decorah, Iowa. She serves on a number of boards and professional associations, including the Electronic Journal for Feminist Studies in Religion (EFSR) where she regularly contributes and blogs on various topics. Currently, her blogs take a critical look at the problem of Islamophobia as a growing global crisis.

Sharon is married to Madhu Rao, who is a Senior Manager working on SAP implementations. They have one son, Arth Aadrian Rao, who is four years old. Arth is being raised both in the Christian as well as the Hindu traditions and speaks three languages.

Contact Information
Email
Sharonjacobpts@gmail.com
Phone
2032142710
Website
https://www.gtu.edu/faculty/sharon-jacob
Curriculum Vitae
Link
PDF
PDF Download
not available
Related Updates
No items found.
Thank you for adding a profile!
We'll email you once it's been successfully added to the database.
Oops! Please make sure all required (*) fields are filled out.