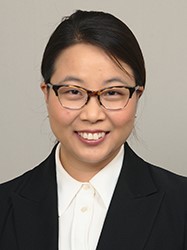 Dr. Helen Jin Kim is a historian who studies American history and religion in global context. She is the author of Sacred Allies: Cold War South Korea and the Rise of American Evangelicalism (Oxford University Press, forthcoming 2021). She uses English and Korean language sources from U.S. and South Korean archives, tracing linkages between the rise of world Christianity, race and the global Cold War, and modern American evangelicalism. She is also co-author of Family Sacrifices: The Worldviews and Ethics of Chinese Americans (Oxford University Press, 2019), a study on contemporary American religious “nones." Kim is a member of the American Academy of Religion, American Society of Church History, and the Association for Asian American Studies. She is the first Asian American woman and faculty of Korean descent at Candler.

Kim completed her MDiv and PhD at Harvard as a William R. Hutchison Presidential Fellow. Her research began at Stanford in Comparative Studies in Race and Ethnicity and with the Asian Pacific American Religion and Research Initiative (APARRI). Prior to graduate studies, Kim worked at Google, Inc.

Contact Information
Email
helenjkim@emory.edu
Phone
404-727-4073
Website
https://candler.emory.edu/faculty/profiles/kim-helen.html
Curriculum Vitae
Link
PDF
PDF Download
not available
Related Updates
No items found.
Thank you for adding a profile!
We'll email you once it's been successfully added to the database.
Oops! Please make sure all required (*) fields are filled out.