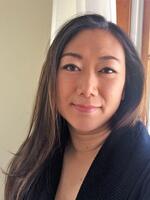 Her current book project, Immigration and Apocalypse: The Revelation of John in the History of American Immigration, focuses on apocalypticism and the use of Revelation in the political discourse surrounding American immigration – both in utopian visions of America and dystopian fear of “outsiders.”

Prof. Lin has also published a number of scholarly works in edited volumes such as Present and Future of Biblical Studies (Brill 2018), The Oxford Handbook of New Testament, Gender, and Sexuality (Oxford 2018), and Reading in These Times: The Critical Task (SBL 2018).

Contact Information
Email
yii-jan.lin@yale.edu
Phone
203-432-1598
Website
https://divinity.yale.edu/faculty-and-research/yds-faculty/yii-jan-lin
Curriculum Vitae
Link
https://divinity.yale.edu/sites/default/files/user-cv-uploads/2021_yii-jan_lin_cv.pdf
PDF
PDF Download
not available
Related Updates
No items found.
Thank you for adding a profile!
We'll email you once it's been successfully added to the database.
Oops! Please make sure all required (*) fields are filled out.