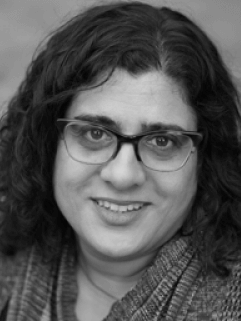 Samira K. Mehta is an Assistant Professor of Women and Gender Studies and of Jewish Studies. Her research and teaching focus on the intersections religion, culture, and gender, including the politics of family life and reproduction in the United States. Her first book, Beyond Chrismukkah: The Christian-Jewish Blended Family in America(University of North Carolina Press, 2018) was a National Jewish book award finalist. Mehta’s current project, God Bless the Pill? Sexuality, Contraception, and American Religion examines the role of Jewish, Catholic, and Protestant voices in competing moral logics of contraception, population control, and eugenics from the mid-twentieth century to the present. Research from this project appears in “Family Planning is a Christian Duty: Religion, Population Control, and the Pill in the 1960s” from Devotions and Desires: Histories of Sexuality and Religion in the Twentieth- Century United States. She is the co-chair of the Religions and Families in North America Seminar of the American Academy of Religion and serves on the steering committee of the North American Religions Program Unit of the AAR. She is also a member of the Diversity and Inclusion Task Force of the Association for Jewish Studies.

Mehta has held fellowships from the John W. Kluge Center of the Library of Congress, the American Council of Learned Societies, the Sloan Foundation’s Center for Myth and Ritual in American Life, the American Jewish Archives, and the Northeastern Regional Fellowship Consortium, among others. Mehta holds degrees from Emory University, Harvard University, and Swarthmore College.

Contact Information
Email
Samira.Mehta@Colorado.edu
Phone
Website
https://www.colorado.edu/jewishstudies/people/faculty/samira-mehta
Curriculum Vitae
Link
PDF
PDF Download
not available
Related Updates
No items found.
Thank you for adding a profile!
We'll email you once it's been successfully added to the database.
Oops! Please make sure all required (*) fields are filled out.