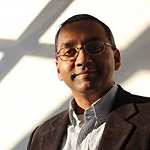 Devaka Premawardhana’s research and teaching bring ethnographic and existential perspectives to bear on the fields of global Christianity and African religions. He is an anthropologist with extensive fieldwork experience in Makhuwa-speaking communities of Mozambique (in southeast Africa). His first book, Faith in Flux: Pentecostalism and Mobility in Rural Mozambique, explores the ambiguities of religious change among a traditionally mobile people. It contests the widely assumed narrative of a worldwide Pentecostal “explosion,” doing so on the grounds that indigenous religions often remain vibrant and influential—even in the lives of converts.

Among other awards and honors, Premawardhana was named a 2017 Emerging Scholar by Diverse: Issues in Higher Education magazine. He has served on the editorial board of the Encyclopedia of Christianity in the Global South and currently sits on the steering committee of the American Academy of Religion’s African Religions unit. Before joining Emory’s department of religion in 2018, Premawardhana earned his Ph.D. from Harvard University and taught at Colorado College.

Contact Information
Email
dpremaw@emory.edu
Phone
404-727-2965
Website
http://religion.emory.edu/home/people/faculty/Premawardhana-Devaka.html
Curriculum Vitae
Link
PDF
PDF Download
not available
Related Updates
No items found.
Thank you for adding a profile!
We'll email you once it's been successfully added to the database.
Oops! Please make sure all required (*) fields are filled out.