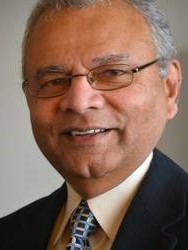 The Rev. Dr. Shanta D. Premawardhana is President of the OMNIA Institute for Contextual Leadership, a global leadership training institute for religious leaders and people of faith based in Chicago, Illinois, USA.

Premarawardhana is originally from Sri Lanka, where he attended seminary education, as well as in India. Arriving in the United States in 1981, he followed graduate study at the Northwestern University in Evanston, Illinios, where he earned his MA and PhD in Religion.  Remaining in the Chicago area, he founded the Chicago Ashram of Jesus Christ, a Christian community with an outreach to South Asian immigrants.  As well, he served as senior pastor of Ellis Avenue Church located in the south side of Chicago for fourteen years.

Premawardhana returned to Chicago following his most recent position of director for the Program Interreligious Dialogue and Cooperation at the World Council of Churches (WCC), a worldwide fellowship of Protestant and Orthodox churches based in Geneva, Switzerland.  Prior to moving to Geneva, Premawardhana served as the Associate General Secretary for Interfaith Relations at the National Council of Churches of Christ, based in New York.

Contact Information
Email
shantap@omnialeadership.org
Phone
Website
https://www.kaiciid.org/dialogue-knowledge-hub/resources/whos-who/rev-dr-shanta-d-premawardhana
Curriculum Vitae
Link
PDF
PDF Download
not available
Related Updates
No items found.
Thank you for adding a profile!
We'll email you once it's been successfully added to the database.
Oops! Please make sure all required (*) fields are filled out.