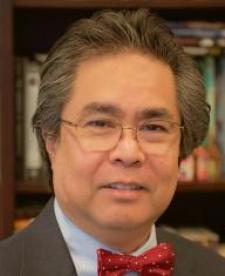 Lester Edwin J. Ruiz joined the staff of The Association of Theological Schools (ATS) in August 2008, which he currently serves as director of accreditation and global engagement. His work includes facilitating accrediting reviews, providing education and support to member schools about the process of accreditation, and providing staff support to the work of the Board of Commissioners of the ATS Commission on Accrediting. In addition, he focuses on continuing to explore opportunities to build strategic partnerships with theological educators worldwide on behalf of ATS. Prior to ATS, Ruiz was a faculty member of New York Theological Seminary (NYTS) in New York City beginning in 1997, where he was professor of theology and culture. He became vice president for academic affairs and academic dean in 2006. Before NYTS, Ruiz was associate professor of political science at International Christian University, Tokyo, Japan, teaching courses in peace and world order studies, international relations, and politics and culture. He is ordained in the Convention of Philippine Baptist Churches. Ruiz is coeditor of four published works, including Re-Framing the International: Law, Culture, Politics, with Richard Falk and R.B.J. Walker, and he has contributed numerous chapters to books and has been widely published in journals and other periodicals. He serves on the editorial committees of Alternatives: Global, Local, Political, the Journal of World Christianity, and Silliman Journal, is a member of the Steering Committee of the Global Forum of Theological Educators, on the advisory board of Global Action to Prevent War and is on the board of the Foundation for Theological Education in South East Asia. A graduate in pastoral care and counseling from Ottawa University (Kansas, 1977), Ruiz holds a Master of Divinity with an emphasis on religion and society (1981) and a PhD in social ethics (1985) from Princeton Theological Seminary.

Contact Information
Email
ruiz@ats.edu
Phone
412-788-6505x255
Website
https://www.ats.edu/about/staff/lester-edwin-j-ruiz
Curriculum Vitae
Link
PDF
PDF Download
not available
Related Updates
No items found.
Thank you for adding a profile!
We'll email you once it's been successfully added to the database.
Oops! Please make sure all required (*) fields are filled out.