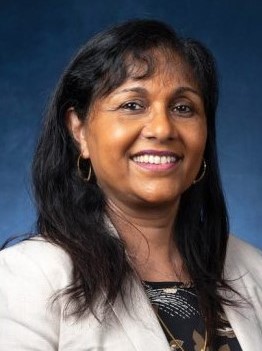 Ms. Leelamma Sebastian joined St. Mary’s faculty in the summer of 2020 as Director of Pastoral Formation. Originally from Kerala, India, she has lived most of her life in California and Hawaii, and she has two adult daughters who live and work in the San Francisco Bay area.

From a young age, Ms. Sebastian was greatly influenced by her brother, a priest in the Missionaries of Charity, and his ministry with the poor and the homeless. Inspired by his example, she left home for the first time at age 15 to experience Mother Teresa’s message  of “seeing Christ and the dignity of life in every human being, no matter their station.” That new-found determination to live for others was the beginning of her personal and spiritual formation. Two years later, she returned to her hometown, where she enrolled in college, graduating with a bachelor’s degree in economics.

Marriage and a move to San Francisco followed, until she and her family relocated to Honolulu, where she attended graduate school. While studying for her master’s degree in Counseling and Psychology at the Chaminade University of Honolulu, Ms. Sebastian counseled teens and young adults at the Mary Jane Center, a residential homeless program of Catholic Charities for pregnant teens and adults. Upon graduation from Chaminade University, she worked for the Diocese of Honolulu as program director for the Oahu Office of Social Ministry. Years later, she completed a second master’s degree, this one in organizational leadership from Gonzaga University.

In 2001, Ms. Sebastian and her family returned to the Bay Area as she became the program director of the Jesuit Retreat Center of Los Altos, where she also trained as a spiritual director in the Spiritual Exercises of St. Ignatius of Loyola. After twelve years, Ms. Sebastian became both a formation advisor and Associate Director of Pastoral Year at St. Patrick’s Seminary and University in Menlo Park, California. Her work at St. Patrick’s enabled her to utilize her years of training and experience in spiritual formation and retreat direction to engage seminarians in their formation journey.

Contact Information
Email
lsebastian@stmarys.edu
Phone
410-864-3618
Website
http://www.stmarys.edu/seminary/faculty/leelamma-sebastian/
Curriculum Vitae
Link
http://www.stmarys.edu/wp-content/uploads/2020/12/Sebastian-CV-Fall-2020-1.pdf
PDF
PDF Download
not available
Related Updates
No items found.
Thank you for adding a profile!
We'll email you once it's been successfully added to the database.
Oops! Please make sure all required (*) fields are filled out.