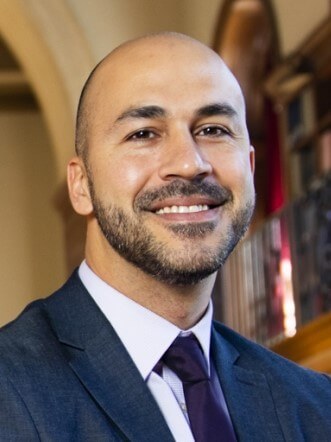 Devin Singh is a social theorist, scholar of religion andtheology, and leadership strategist and adviser.

Devin is a tenured Associate Professor of Religion atDartmouth College, where he teaches courses in religion, philosophy, ethics,organizational dynamics, and the connections among religion, economics, andpolitics. He serves as a guest lecturer at Tuck School of Business, and hasalso held positions at Harvard, Princeton, and Yale.

He received his Ph.D. in religious studies from Yale, wherehe was named a Whiting Fellow, Yale's highest recognition for research in thehumanities. He was also trained in social scientific theory and methods at theUniversity of Chicago (M.A.), theology and divinity at Trinity InternationalUniversity (M.Div.), and religious studies at Pomona College (B.A.).

Devin is also founder and president of Leadership Kinetics,LLC, a coaching, training, and leadership development firm that draws on thebest humanistic and social scientific insights for practical engagement. Herehe helps leaders improve their effectiveness, in order to shape theirorganizations to impact their people and the wider society for good.

Hailing from a multiethnic and interreligious family, andraised around the world in diplomatic and international development contexts,Devin "never had a chance," as he puts it - "I could not escapewrestling with questions of identity, culture, religion, social change,leadership, and geopolitics. These were imposed upon me from birth."

From having his home bombed during childhood (as collateraldamage) in an attempted coup d'état in Cameroon, to visits to medinas andmosques in Morocco, attending Sikh gurdwaras in Punjab, contemplating massgrave sites in Bosnia, facilitating community development projects in the urbanU.S., or participating in sacred kickboxing matches in Thailand, for instance,Devin’s journey has taken him through the rich and complex textures ofreligion, politics, economics, and culture in global society.

Devin’s study of religion has been a way of making sense ofhis upbringing and the complexities of the world he encountered, for religionis a critical thread that binds together various aspects of humanmeaning-making in societies. His research is also motivated by a passion andburden to help others see, appreciate, and navigate the nuance and complexitiesof life together on this planet.

Through his writing, teaching, speaking, and advising, Devinhopes to further mutual understanding, toleration, justice, and compassion--aswell as meaningful and sustainable work, productivity, and value creation. Alife of the mind and a deep engagement with the riches of the humanities andsocial sciences, he believes, are a crucial part of this endeavor.

Contact Information
Email
Devin.P.Singh@Dartmouth.edu
Phone
Website
http://www.devinsingh.com/
Curriculum Vitae
Link
PDF
PDF Download
not available
Related Updates
No items found.
Thank you for adding a profile!
We'll email you once it's been successfully added to the database.
Oops! Please make sure all required (*) fields are filled out.