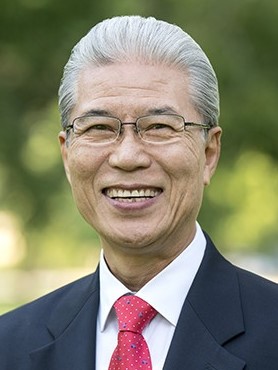 A native of Korea, Tom Song graduated at the top of his class from Jung-Ang University. An accomplished opera performer, Song became drawn to church music while working with Youth For Christ in Seoul, where he also began his association with his friend and mentor, Dr. Billy Kim. He received the Master of Church Music degree from the Southern Baptist Theological Seminary. He continued to study, receiving the Doctor of Musical Arts degree in vocal performance and conducting from the University of South Carolina, and combined his musical talents with his calling to become a minister of music. Song answered the call to the full-time music ministry in 1985.

After returning to Korea in 1993, Song has become a leading figure in church music in Asia. For more than a decade, he served as Minister of Music at Suwon Central Baptist Church, one of the largest churches in Korea, where Dr. Billy Kim had been senior pastor and is now pastor emeritus. Since 1976, Song has traveled with Dr. Kim’s global ministries. In 2002, Song was music director for the National Combined Christian 5000 Member Choir at the Seoul World-Cup Stadium. He has also taught for many years as adjunct professor of church music at the Korea Baptist Theological Seminary.

Song has received numerous awards for conducting and vocal performance, both in opera and church music. He has also distinguished himself as Music Coordinator of the Baptist World Alliance and Vice President of the Asian Baptist Federation, a forum that represents 22,000 local Baptist churches in 20 countries across Asia. His radio program, featuring the Korean Singing Ambassadors, is broadcast through the Far East Broadcasting Company and reaches many parts of Asia. In 2004, recognizing Song’s remarkable talents as a church musician and his marvelous service to the cause of Jesus Christ throughout the world, Mississippi College bestowed on him an honorary Doctor of Fine Arts degree. Song continues to reach out to the world through his innovative work in music ministry.

Contact Information
Email
tsong@swbts.edu
Phone
817-923-1921x3270
Website
https://swbts.edu/staff/tom-song/
Curriculum Vitae
Link
PDF
PDF Download
not available
Related Updates
No items found.
Thank you for adding a profile!
We'll email you once it's been successfully added to the database.
Oops! Please make sure all required (*) fields are filled out.