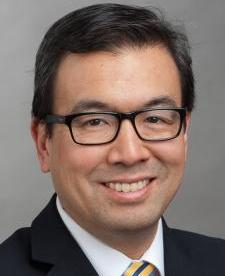 Frank M. Yamada began as executive director of The Association of Theological Schools in July 2017. He oversees the work of both the Association and the Commission on Accrediting. Prior to ATS, he joined the McCormick faculty in 2008 as associate professor of Hebrew Bible and director of the Center for Asian American Ministries. In 2011, he was elected as McCormick’s tenth president—the first Asian American to lead a Presbyterian Church (USA) seminary. His tenure there was marked by increasing diversity in McCormick’s student body and creative engagement with the shifting realities of theological education. Yamada previously had taught Hebrew Bible/Old Testament for nine years at Seabury-Western Theological Seminary in Evanston, Illinois.

An active biblical scholar, Yamada has authored and edited books and articles on cross-cultural and feminist hermeneutics. He is a member of the Society of Biblical Literature, where he has served as a chair and as a steering committee member of the Asian American Biblical Hermeneutics Group, the Feminist Hermeneutics of the Bible Section, and the Committee for Underrepresented Racial and Ethnic Minorities in the Profession. In addition, he was a member of the Ethnic Chinese Biblical Colloquium and the American Academy of Religion, and he was the cochair for the Managing Board of the Asian Pacific Americans and Religion Research Initiative annual conference.

A graduate of Southern California College, Yamada earned his Master of Divinity and Doctor of Philosophy from Princeton Theological Seminary. He is an ordained minister in the Presbyterian Church, USA and has written and spoken on the future of the church and theological education.

Contact Information
Email
yamada@ats.edu
Phone
412-788-6505, ext. 258
Website
https://www.ats.edu/about/staff/frank-m-yamada
Curriculum Vitae
Link
PDF
PDF Download
not available
Related Updates
No items found.
Thank you for adding a profile!
We'll email you once it's been successfully added to the database.
Oops! Please make sure all required (*) fields are filled out.